Philadelphia is located between Washington DC and New York in the Northeast of the US. It is the USA fifth largest city and home to over 1.5 million people. This Pennsylvania city is considered to the United State birthplace as the country’s Declaration of Independence from Britain was first read here in 1776. Here are the top must see attractions in Philadelphia.

This city is also the constitution’s birthplace. It was debated in the State House eleven years later. The founding fathers of America walked in these streets and many of the buildings here are preserved as part of the nations Independence Park. Take in the story of the Roaring Twenties Prohibition while you are still at the National Constitution Center. There was fierce protests against the anti liquor law which led to many arrests. Al ‘Scarface’ Capone was perhaps the most prominent bootlegging gangster. His first prison sentence was spent in the Eastern State Penitentiary. Hear some gripping stories that bring this jail back to life by taking an audio tour. 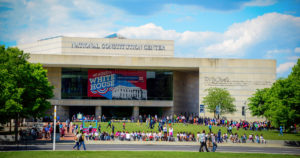 Head to this museum if you want to hear more voices from this city’s past. The various artifact collection and audiovisual projections are aimed at preserving African American’s heritage.

The Tomb of the Unknown Soldier during the American Revolution lies within this square. The colonial past of this city is still very apparent though Philadelphia is now a modern city with plenty of shopping and culture. Do like the locals by exploring the city by public transport or bike.

Fairmount Park is the public backyard of Philadelphia. It showcases many of the city’s architectural treasures and it is great for a walk. Check out the Smith Frank Arch which was dedicated to the Civil war military heroes. At the Benjamin Franklin Parkway you can admire some outdoor art.

The Philadelphia Museum of Art is one of the largest museums in the USA. It had more than 200 themed galleries displaying up to 230,000 objects, sculptures, and printings.

This is a great place your kids can play even toddlers will love it. There is an educational and fun interactive display in the museum.

Another place children can learn is this academy in Logan Square. They can pet live animals here or just admire the different roaming species.

Visit the Philadelphia Zoo for more interaction with animals. Encounter big birds, imitate the monkeys, or simply admire any of the many wild animals of the oldest zoo in America.

Head to the Reading Terminal Market to have a taste of this city’s local foods. From one of the colorful stalls, handpick deli treats or find out why the local people here love cheese steaks.

Philadelphia has a pleasant climate in fall and springtime. You can see the best of this city during this colorful seasons but that is not to say Philadelphia is not stunning all year round. Once you are here, you will discover why many Americans cherish Philadelphia so much.